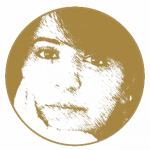 Anusha Yadav was brought up between UK, USA and India in a family that encouraged cultural and intellectual curiosity. After graduating from National Institute of Design, Ahmedabad in 1997, her career trajectory has been incredibly fun and eclectic – leading her to become an internationally renowned visual & narrative archivist, a photographer, and a brand & legacy design consultant under her advisory The Memory Company.

The Memory Company specialises in designing sophisticated legacies in varying formats ( i.e Books, Print, Online and offline Exhibition and Digital Media), for individuals, families and brands longevity, knowledge  and audience admiration. Under the umbrella of TMC, Anusha has innovated many of the firsts in the cultural world – an exhibit on historical criminal investigations from the subcontinent – The Photograph is Proof,  displayed in the UK in 2015, and then in India in 2017.

In 2010, Anusha founded Indian Memory Project – The world’s first and most admired online visual & narrative archive that traces personal identities & histories of the Indian Subcontinent via images found in personal archives. The project has pioneered an alternate method for narratives, and histories of the world to be understood and has inspired 13 countries and several cultural entities to implement similar formats in their archives. The project is now included in international syllabi and curriculum worldwide. In 2015, The New Yorker magazine showcased Indian Memory Project on Instagram to two million new visitors.

In inclusion to being a speaker on several esteemed panels, universities and museums around the world, Anusha has been awarded by the International Design Awards for Human Intelligence in China, Europe’s Prix Ars Electronica award, both international awards for excellence in Digital Arts, the L’oreal Paris Femina Women Achievers’ Award and the Innovator of the Year – by the India Today Women’s Summit. Anusha lives in Mumbai and works both in Mumbai and the UK.