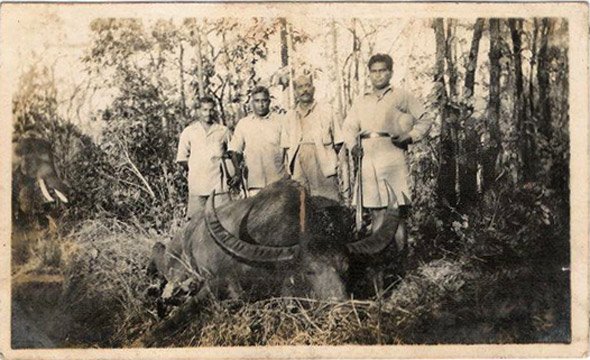 My father, F Shankar Alva (right) with game, a Bison. Jeypore, Koraput (now Orissa) 1928 Image and Narrative contributed by Jayakar Alva, Bengaluru My father Shankar Alva graduated in B.Sc from the University of Edinburgh, Scotland, in 1923. He then returned to India and took on the role of the Chief Forest Officer and Assistant to the Dewan of Koraput, from 1928-1941. He was based at the outskirts of Jeypore, a city south of Vishakhapatnam (now Vizag) in Orissa. This image of my father hunting for Game, with his staff was probably taken in 1929. The Wild bull was shot by my father, as there was permissions at the time to hunt wild animals, albeit selectively, and especially if they were on a rampage. Animals would roam around freely and you can even see a wild elephant in the background of the image. I was a little boy then, and I lived in the forest with my father for only about 5 years. After the death of one brother due to a cerebral malaria epidemic in the village in 1941, my father quit his job. He then returned and retired to his native place, Shiruvagim, a village he owned. My mother Kamla Alva was a well known social worker and worked with many institutions, in Mangalore as well as Jeypore, with organisations focusing on women’s health care and rights. I worked in marketing & research industry for the defense sector for many years and then I became a teacher. I now live in a senior citizen’s home in Bangalore.