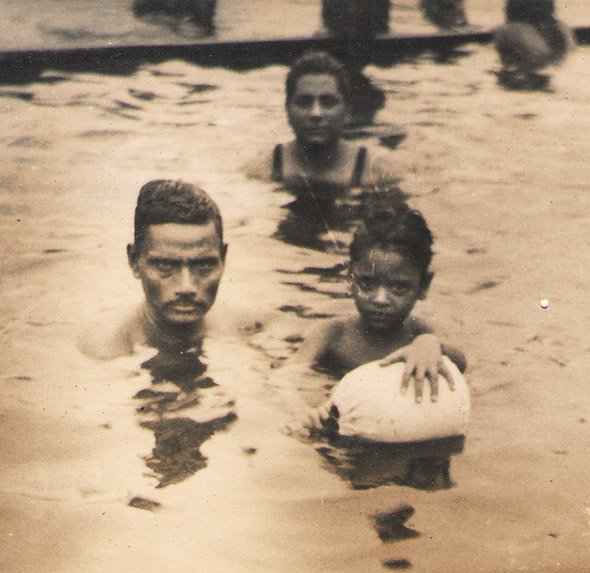 Nalin Malik with me and my father. Calcutta, West Bengal. December, 1950

Nalin Malik with me and my father. Calcutta, West Bengal. December, 1950 Image and Narrative contributed by Abhijit Das Gupta, Kolkata This image was photographed in Calcutta (Now Kolkata) in 1950. I was about four years old. My Father used to take me to the swimming club in Dhakuria lake (now Rabindra Sarovar). The pool in the club doesn’t exist any more. In the picture, a man called Nalin Malik is on the left, and behind us swims my father. Nalin Malik was our swimming trainer and what is not known is that Nalin Malik represented the British India in the 1932 Olympics held in Los Angeles, USA . He never had any formal training, in fact he was so poor that he could not even afford full meals. From what I know, my uncle, Pankaj Gupta, also a sports legend spotted Nalin swimming in the Ganges. Pankaj Gupta was a sports administrator and he too began his career with the 1932 Summer Olympics in Los Angeles. He was a manager and coach to the Indian contingent and managed several sports events across Europe and the USA. Nalin Malik stood fourth in the 400 Meters Swimming Heat 4. He swam without even a proper swimming costume. People used to say Nalin Malik did not swim – he mowed the water apart. The unfortunate part is that he remained an unacknowledged, secluded, and a very lonely man whom no one remembered or paid tribute to. I however, have fond memories of him. He was a very tough trainer. On this day in a cold December in 1950, he made me cross the lake. The return was on his back.