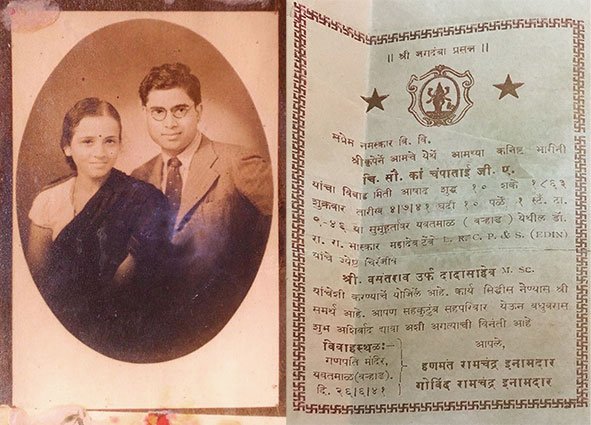 Left) My grandparents’ photograph taken shortly after their marriage. (Right) The Wedding invitation card. Poona, Maharashtra. 1941 Image and Text contributed by Aparna Pandey, Mumbai This is a photograph of my grandparents Champa Tai and Vasant Rao taken shortly after they got married. On the right is an invitation to my grandmother's wedding in 1941. It has been carefully preserved by the family and was handed over to me by my mother recently. I treasure it, not because of the sentimental reasons, but because it tells a story of far greater significance. This wedding invite is unique because it proudly announces the bride's educational qualifications, right next to her name. You have to keep in mind, that women's education at that time in ancient India was almost non-existent. My grandmother had decided quite early on that she will be educated first and then get married. As a child, she lost both her parents very early and was brought up by her two elder brothers who completely understood and encouraged her dream. However, there was a problem - There was no school for a young brahmin Maharashtrian girl to study in. The brothers got her to Poona (now Pune) where the well-known social reformer, Maharshi Karve had started a school for girls, as well as an ashram where young widows could live and learn. This concept was alien and completely norm shattering for the brahmins of Poona leading to the resistance to opening such a school to be set up in the main city. Maharshi Karve had no choice but to set up the school on the outskirts of Poona. He braved all odds and went ahead with his mission of… 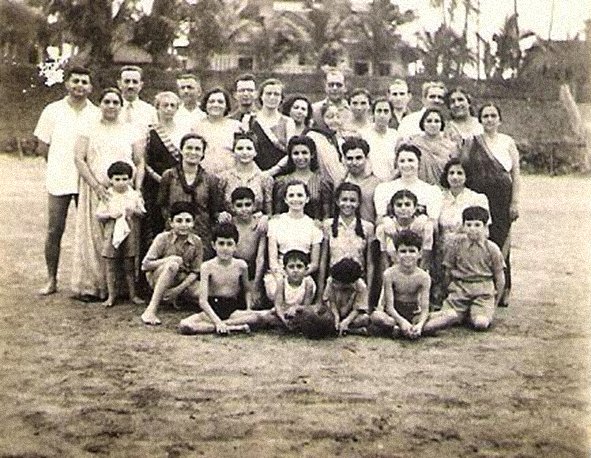 Our family and friends at the Juhu Beach. Bombay. 1941

Our family and friends at the Juhu Beach. Bombay. 1941 Image & Narrative points contributed by Rumi Taraporevala/ Sooni Taraporevala This photograph of our family was taken by my youngest kaka (uncle) Shapoor at Juhu Beach. We had all gone out to Juhu beach for a picnic, outside the Palm Grove hotel (now Ramada Plaza Palm Grove). It was a regular haunt for picnics and we used to look forward to our day out for weeks. The beach was totally un-spoilt and had only a few small shacks around. Now I wouldn’t go even if someone paid me for it. I remember, we would take the train from Grant Road to Santa Cruz and then take a bus to Juhu beach. At that time the Bombay trains were not called Western or Central railways. The Western line was called BB & CI – Bombay Baroda and Central India Railways and the Central line was called GIP - Great Indian Peninsula Railway. I don’t remember what we would do though, I think mainly chatter, run around, eat and some of us swam. Picnic lunches were fun, sometimes they were large tiffins full of Pork Vindaloo. It was very tasty. In the middle wearing a white dress is Freny, now my beautiful wife, and on her left is me. Freny and I are also first cousins, our fathers were real brothers. Like some other communities in India, in Parsis too, marriage between cousins is allowed. Though we weren’t an arranged match, we just fell in love with each other. She was beautiful. I think even at this picnic I was eyeing her. Our parents must have noticed and declared that we must be made… 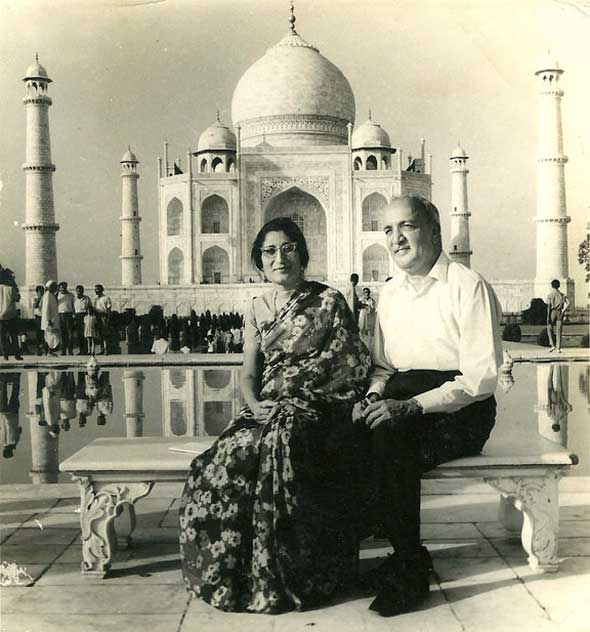 My maternal grandparents, Rukaya and Sultan Dossal at the Taj Mahal. Agra, Uttar Pradesh. 1971 Image and Narrative contributed by Alisha Sadikot, Mumbai This picture of my grandparents was taken on a trip to Delhi, Jaipur and Agra. A route known to tourists as the The Golden Triangle. My grandparents, Rukaya and Sultan Dossal were married in 1949 in the city of Bombay. They had met a few years earlier, when my grandmother Rukaya compelled him to buy a theatre ticket she had volunteered to sell, unaware that this expense of Rs. 10 was one he could then ill afford. The story of their early courtship is one of my favourites. Here it is, recorded in her own words in a memoir she wrote for her grandchildren, 60 odd years later: ‘Needless to say that I was quite struck by Sultan and I remember coming home and telling Saleha (sister) that I had met a very handsome man, but most probably he must be married. I was greatly relieved sometime later when I learnt that he wasn’t. I suppose, Sultan must have been duly impressed as well because he made every attempt to see me. As he told me later, he would leave his office at Flora Fountain at a particular time to catch me walking down from Elphinstone College towards Churchgate Station and to me it seemed that it was just a happy chance. We would then have coffee at Coffee House. I avoided going to movies with him but one day when we met by chance in a bus and he was getting down at the next stop, I told him I’d like to go to the movies… 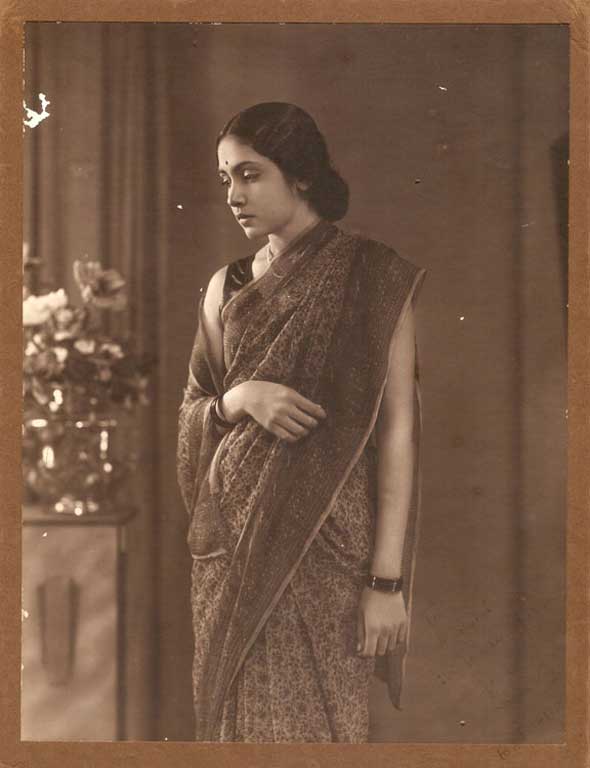