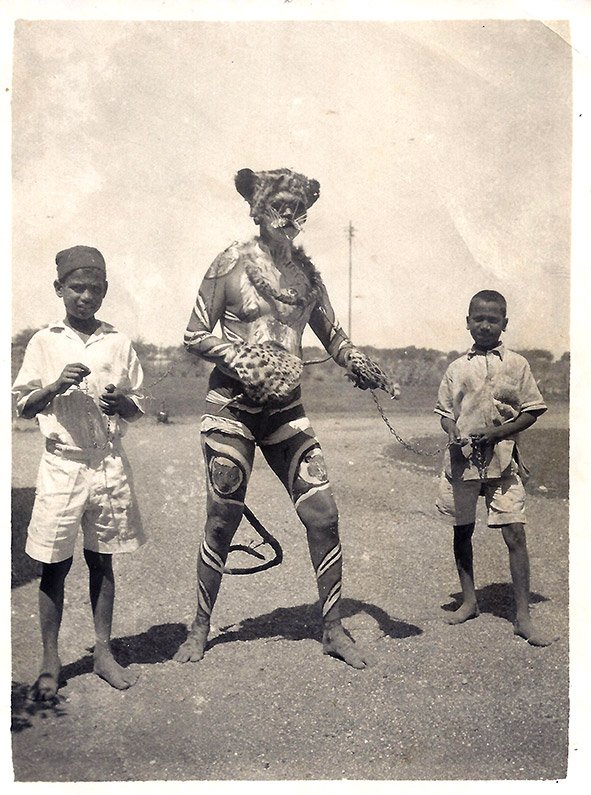 The Tiger Man, Jabalpur, Madhya Pradesh. Circa 1930 Image and Narrative contributed by Deborah Nixon, Australia This image was found in my father Leslie Nixon's private collection. He was born in Agra in 1925, was schooled in Mussoorie, and trained with the Gurkhas. Later he joined KGV’s 1st OGR (King George V’s regiment). My Anglo Indian family has a history of having lived in India for four, or possibly five generations- they were all Railways people, and my father worked during the Partition to transport refugees in and out of the Gurkha head quarters. He archived all of the family images in India and thanks to him I have been lucky to have a ‘bird’s eye view ‘ of partition. He kept a lot of old army documents and memorabilia from the few years he served with the Gurkhas. When he migrated to Australia he went to University and became a Geologist. There isn't a lot to say about this image as there was nothing written behind it, but to me it is a very arresting photograph. My father says he remembers the 'tiger men' used to come around in Jabalpur, his family home, and dance as part of the Islamic festival Muharram and he imitated the dance himself as young children do. There is another image and narrative on my father here that sheds some light on his life in India.