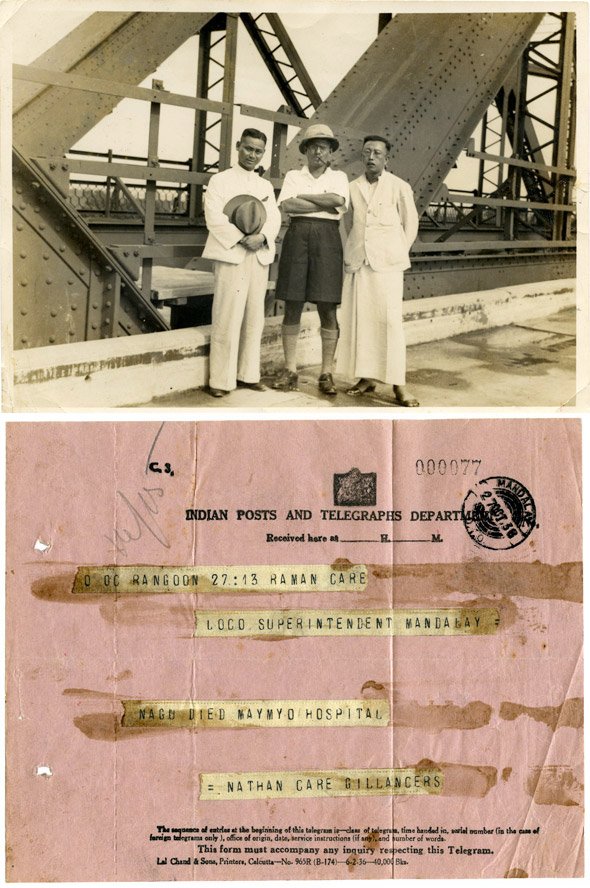 My father's brother, Nagarathnam with his colleagues. Burma, 1938

My father's brother, Nagarathnam with his colleagues. Burma, 1938 Image and Narrative contributed by Meera Janakiraman, Bengaluru This image was photographed on October 26, 1938, in Burma. The person in the center is my father's elder brother, Nagarathnam, with his colleagues from Burma. My father T.J Raman and Nagarathnam’s parents (my grandparents) were originally from Thiruvallikeni, (now Triplicane) State of Madras. Their family business involved exporting Burmese Teak. Teak during war was “as important an ammunition of war as steel”, especially used in the construction of Warships. The family moved to Burma (formerly Myanmar) during World War I as it made better business sense. Nagarathnam, fondly called Nagu, got married when he was 23 years old and had two sons. Leaving his family in with good care in Madras, he returned to Burma and first worked as a representative of the Prudential Life Insurance Company before he joined the Burma Railways as a clerk. He was on his way to Mandalay, the royal capital of Burma, on a business visit by train when this photograph was taken. It is believed that during the travel he chocked on a piece of guava. Late at night, he was rushed to the Mayyo Hospital where he was declared dead due to heart failure. He died at the age of 30, the very next day after this photograph was taken. A telegram announcing his death was sent to his family in Madras via Calcutta.