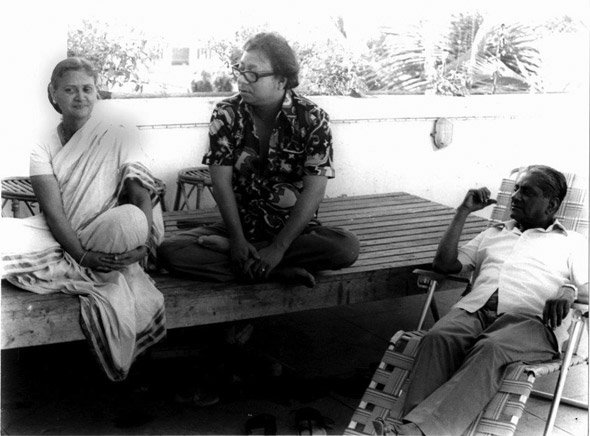 My grand-aunt, RD Burman and my granduncle on the Burman Terrace, Calcutta, West Bengal. 1975 Image and Narrative contributed by Anupam Mukerji, Mumbai This picture was photographed on the terrace of R.D Burman's home in Bombay.R.D Burman was one of India's finest Music composers of the Indian Film Industry. With him are my grand-uncle Nirmal Kumar Dasgupta and his wife Shukla.RD, whom he lovingly called Tublu, was the apple of my granduncle's eye. RD loved him back equally calling him Moni Dadu. R.D Burman's mother was my grand uncle's sister, technically a niece, but since they were closer in age the relationship was like a close sibling. In March of 1975, Moni Dadu and family were visiting R.D Burman. RD was busy recording the soundtrack for now India's biggest box office hit film ever, Sholay. On this morning, sitting on his terrace, RD was playing back for Moni Dadu the scratch recording (rough recording) of his now exceptionally famous song Mehbooba Mehbooba. He had been recording the song through the night. RD had recorded the song in his own voice, even though the final song was to be recorded in Kishore Kumar's. Liking what he had just heard, Moni Dadu advised RD to keep the song in his voice. As fate would have it, Moni Dadu's wish was granted. Kishore Kumar was late for the recording of Mehbooba Mehbooba and RD decided to record the song himself. As we say the rest is history. From the 1960s to the 1990s, R.D Burman composed scores for 331 movies and influenced a generation of Indian music directors. He would have been 73 today, on June 27, 2012.