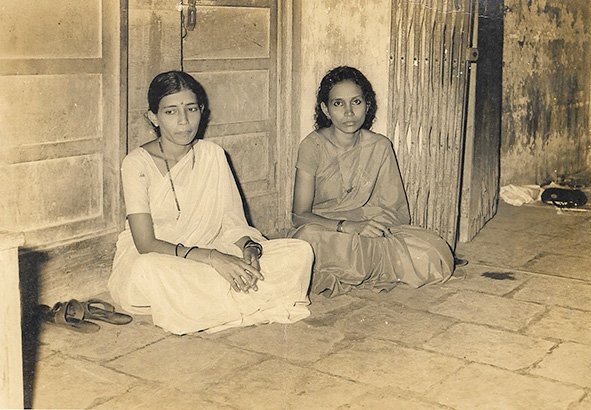 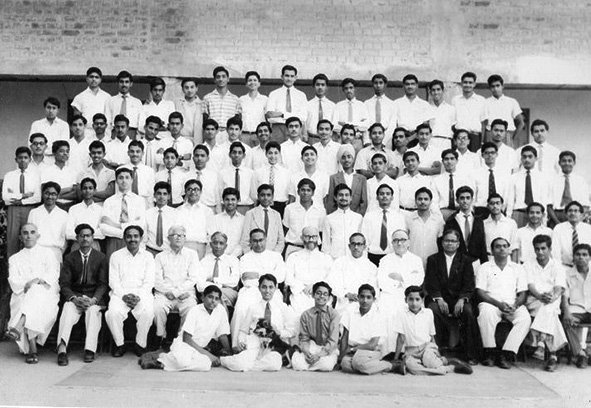 Batch of 59'. Loyolla Hall, St. Xavier's High School, Ahmedabad. Bombay Presidency (now Gujarat). January 24, 1959 Image and Narrative contributed by Suresh Mandan, California, USA This is the picture of us in Class 12, who met for the Day of Orientation, at our Loyolla Hall School in Ahmedabad, Bombay State (now in Gujarat). I stand on the top, third from the left. Among the most popular of the teachers was our Sports teacher Brother Bou, (sitting first from the right). A very fierce teacher, the Ahmedabad Football Association now even runs a Tournament in his name called the Br. Bou Trophy. I was not sure whether I will ever look at this picture again and that too after almost 54 years. But since I have I cannot help but remember all that thoughts that it triggers. It was photographed on January 24,1959, the day of our graduation from School life to the oncoming college life. Our School held an Orientation Class to help us to assess the new world which we would facing in the Life. The control of the school authorities would be gone, the regimentation of the Principal and the Teachers would be gone, a watch on our behaviour would be gone and we would be in an environment where there would be no restrictions to attend the class, to study or to play. We were to make our own decisions regarding what colleges we chose, the faculty we selected as well as the new relationships we formed with friends and girl friends. This was the theme of our Orientation. Ahmedabad at the time was not a part of Gujarat, as the Gujarat state formed only in 1960.… 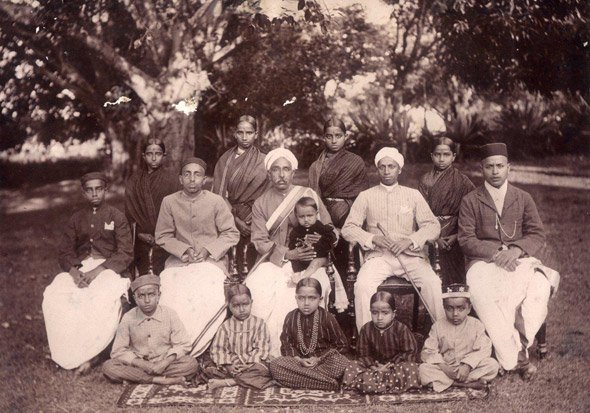 Chennagiri family photograph. Tumkur, District Karnataka. Circa 1901 Image and Narrative contributed by Laxmi Murthy, Bengaluru This picture is thought to have been taken in Tumkur, State of Mysore, immediately after the marriage of my great grand parents Chennagiri Amba Bai, 12 years old (standing top right) with Sreenivasa Rao, then 18 (middle row, sitting right most), with Amba Bai's paternal family, the Chennagiris. I must thank my aunt Prabhamani Rao for all the help in identifying the people of my ancestral family found in this image. Born in 1889 into an orthodox Brahmin family in the erstwhile Mysore State (now in Karnataka), she was widowed at the age of 24 with three children. Sreenivasa Rao, Ambi’s husband was in the Police. He was also a wrestler and a champion swimmer. He died suddenly in 1913, caught in a whirlpool while swimming in Kempambudi Lake (now a sewerage collection tank) in Bangalore. Amba Bai whom we fondly called Ambi, triumphed over her tragic destiny by empowering herself with education. She defied conservative society to educate herself through college, become economically independent, and went on to become the principal of Vani Vilas Girls School in Bangalore. Nothing short of a saga of grit and determination, Ambi's story serves as an inspiration to women who face oppression till today. In her determination to break away from the shackles of social customs, which heaped on a widow the most inhuman treatment, she had the support of her enlightened father, C Krishna Rao, fondly called Rayaru, and his colleagues. With their encouragement she managed to step into a world where no widow had dared to tread. Ambi's father Rayaru (middle row, third from left) was the head of the… 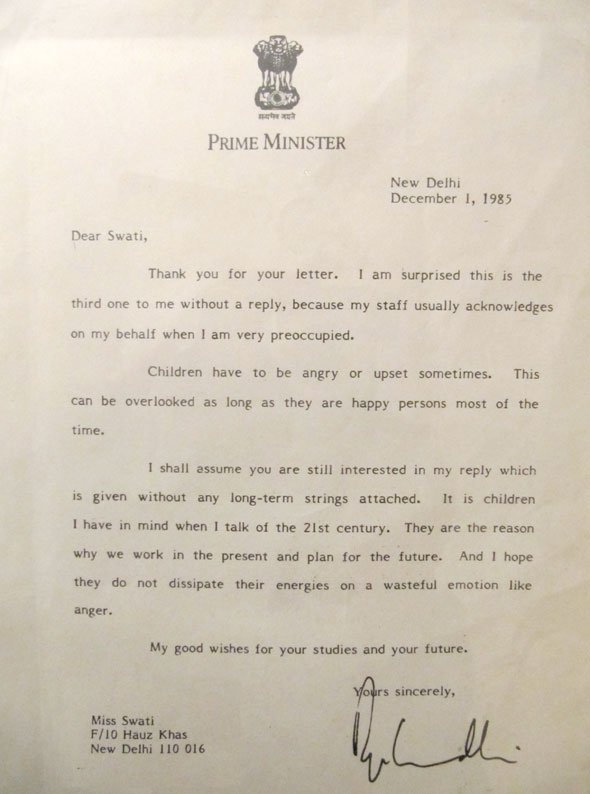 From Rajiv Gandhi to me. New Delhi. December 1, 1985 Letter and Narrative contributed by Swati Bhattacharya, Gurgaon Blame it on my only child-ness if you must, but I love famous people loving me. I like provoking intimacy. But only from the jet-setting beau monde. I crave intimacy from people who have no business to get intimate with me. After coming back from school (Delhi Public School R.K.Puram), and doing the stuff I had to do, I'd sit down and think of writing to someone. The first person I had written to was Hiroko Nagasaki, a Japanese 13 year old swimmer who had swept the Asian Games in 1983. She and I became pen-pals for the next two years. She'd send me paper stickers, perfumed erasers and then one day in school somebody stole my Hiroko box. Traumatic as it was, I quickly recovered because by then I had received a flowery handmade-paper letter all the way from 22, Zaman Park, Lahore, Pakistan. Imran Khan, the famous cricketer, had written to me. The letter became my raison d'etre for a while. The fact that love does find a way, the fact that the letter had 18 red flowers printed at the back, and the fact that it had been signed as 'Imran' and not 'Imran Khan', to me it was a sign of a cosmic connection. We were meant to be and all that...Anyway, I lost this letter in a crowded Mudrika bus, while doing my nth show and tell. The letter I am sharing with you is one that still lives with me. Born out of jealousy, it got written in the November of 1985, when newspapers were full of Rajiv Gandhi writing to a Sri Lankan kid. The TV cameras had gone loooking for her and captured… 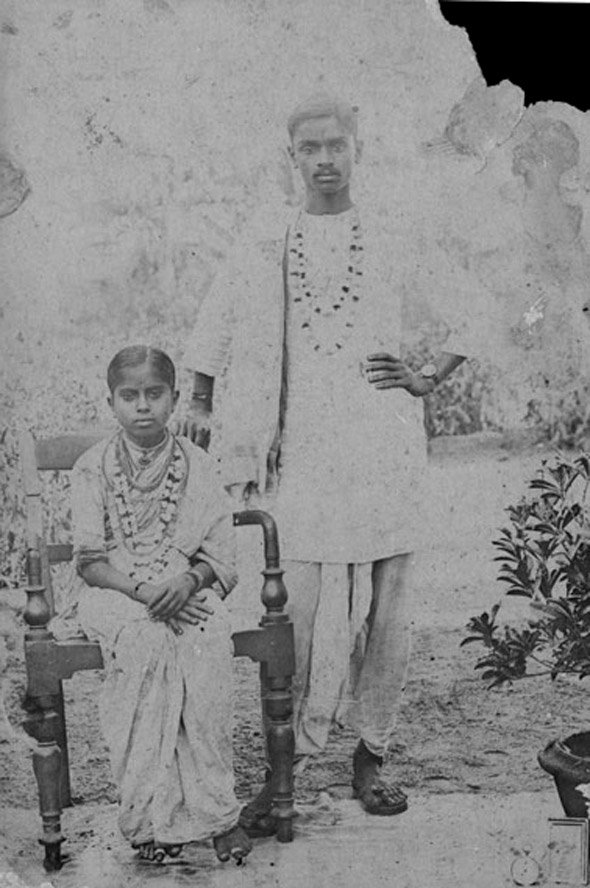 The wedding of my parents. My father, Dr. Gadepally Subbarayudu and Mother, Venkata Ratnalamma, Visakhapatnam, (then Vizagapatam), Andhra Pradesh. Circa 1919